Kyle Pitts starred upon the NFL’s return to Tottenham Hotspur Stadium as the Atlanta Falcons capitalised on a dominant first half to beat the New York Jets 27-20.

Story of the Game

The rookie tight end landed in London as one of the poster boys of this year’s London games, treating an expectant crowd to his first career NFL touchdown and maiden 100-yard receiving outing.

Falcons quarterback Matt Ryan threw for 342 passing yards for two scores on the way towards Atlanta’s second win this season, a dominant first half proving enough for Arthur Smith’s side to fend off signs of a Jets fightback.

Rookie quarterback Zack Wilson meanwhile struggled to build on his first career win against the Tennessee Titans last time out, finishing 19 of 32 for 192 yards and one interception as the Jets managed just 230 total yards on offense compared to the Falcons’ 450. 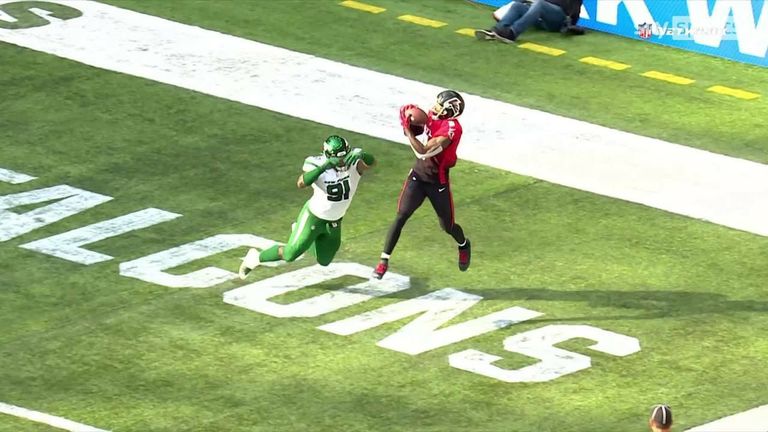 The Jets, as they say, were still back in New Jersey during a first half dominated by the Falcons as they ran their offense through a red-hot Cordarrelle Patterson before entering the break with a 20-3 cushion thanks to Younghoe Koo field goals at either end of the period, a first NFL touchdown for Pitts and another from his fellow tight end Hayden Hurst.

Wilson endured a tough opening as he followed up a quick three-and-out that included a bobbled snap by throwing his ninth interception of the season, Jaylinn Hawkins getting in front of a pass intended for Keelan Cole.

Ty Johnson gave the Jets hope when he ran in a one-yard touchdown on the opening series of the second half before the Falcons shot themselves in the foot with a lost fumble deep in Jets territory amid their efforts to stretch their lead once more. 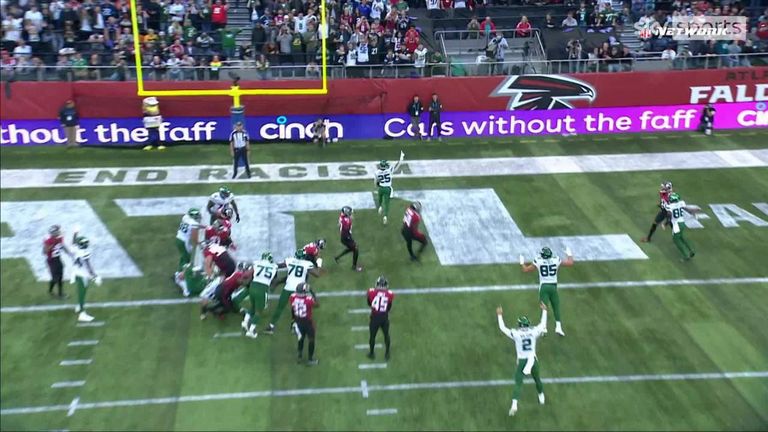 Murmurs of another potential blown Falcons lead began to creep in when Michael Carter’s two-yard touchdown run and Jamison Crowder’s two-point conversion catch reduced the deficit to 20-17 with just shy of seven minutes to play.

But Atlanta maintained their composure, marching downfield via another chunk pickup courtesy of Ryan and Pitts to put daylight between themselves and the Jets through a Mike Davis touchdown run.

Patterson, in the form of his life, played a starring role in Atlanta’s opening touchdown drive when he leapt to haul in a 16-yard catch at New York’s two-yard line in another sign of just how flexible his role under Smith has become, teeing up Ryan’s strike to Pitts on an up-and-out route to the corner of the end zone to ice a 10-play 92-yard march downfield.

The London crowd were then offered a glimpse of Pitts’ impressive catch radius when his outstretched arms on a crossing route met Ryan’s pass for 22 yards, from which Atlanta were propelled to the 17-yard line courtesy of a roughing the passer penalty. Ryan then picked out a wide-open Hurst, who powered into the end zone while doing well to keep control of a momentarily juggling ball to cap an eight-play 77-yard drive.

Wilson’s response was over before it ever really began when he telegraphed his pass to Cole to allow Hawkins in for the Falcons’ first interception of the season, but the rookie quarterback was bailed out by his defense as Michael Carter II recovered CJ Mosely’s forced fumble on Hurst. 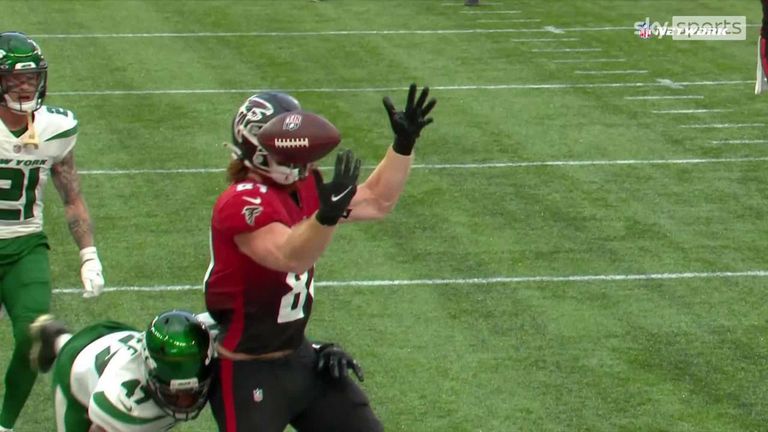 Tevin Coleman turned provider of some individual brilliance for the Jets with a 65-yard kickoff return to open the second half, Johnson eventually rewarding his team-mate’s efforts with a one-yard rushing score only to see Matt Ammendola’s extra point attempt bounce off the upright.

Quincy Williams then helped stall a promising 10-play Falcons drive with a forced fumble on Davis that was recovered by defensive end Shaq Lawson at the Jets’ own 20-yard line, to which the Falcons defense responded well to hold their opponents to a punt.

Wilson’s most commanding drive arrived in the fourth quarter when he strung together 23 and 27-yard completions to Cole and Denzel Mims, respectively, before a 41-yard pass interference penalty against AJ Terrell in coverage on Elijah Moore’s deep-route set up rookie Carter’s rushing touchdown from the two-yard line. The Jets converted the subsequent two-point conversion attempt thanks to Crowder’s catch to the left of the end zone.

Pitts returned with another crucial contribution with a 39-yard catch on the Falcons’ ensuring drive, which ended with Davis punching it in from three yards out to all-but wrap up the victory with 2.19 to play. 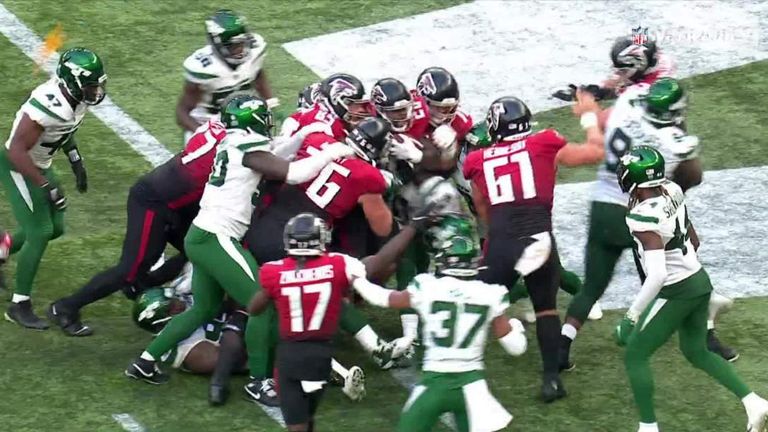 The Jets follow up their bye week with a visit to Foxboro to face the New England Patriots in an all-AFC East clash, while the Falcons take on the Miami Dolphins on the road.

Sky Sports NFL is your dedicated channel for NFL coverage through the season – featuring a host of NFL Network programming. Don’t forget to follow us on skysports.com/nfl, our Twitter account @SkySportsNFL & Sky Sports – on the go!