Kylian Mbappe gained redemption for his Euro 2020 disappointment by scoring France’s Nations League-clinching goal in their 2-1 win over Spain, as the final lived up to a week of remarkable drama in the competition.

The Paris Saint-Germain superstar had missed his country’s crucial spot-kick in their last-16 shoot-out exit to Switzerland in the summer but he scored a penalty to put France into this final and made no mistake when VAR surprisingly called an offside decision in his favour 10 minutes from time in Milan.

Initially this showdown between two of Europe’s heavyweights had struggled to live up to the twists and turns of the midweek semis, with Raphael Varane’s thigh injury the main talking point from a cagey first half – but the contest came to life in the space of three second-half minutes.

Mikel Oyarzabal (64) got the better of Varane’s replacement, Dayot Upamecano, to put Spain in front just seconds after Karim Benzema had crashed a shot against the underside of the bar – but the France striker responded himself moments later with a sensational, curling shot past Unai Simon (66) to equalise.

That set the stage for Mbappe to tuck away Theo Hernandez’s deflected through ball and make the world champions the second-ever Nations League winners, a triumph which signals their return to form just over a year out from their World Cup title defence.

Ahead of kick-off, Sky Sports pundit Jamie Redknapp had praised the improvement in France’s performance levels during their semi-final comeback win over Belgium after their below-par Euro 2020 campaign, and Didier Deschamps’ side were out of the traps quickly on Sunday, with Benzema just failing to profit from a fine Paul Pogba through ball before Aymeric Laporte had to scramble away a Benjamin Pavard cross.

But Spain – who had won a titanic tussle with Italy to get here – showed their own attacking threat when Ferran Torres, who started wide on the right after impressing as a centre forward against Italy, played in Pablo Sarabia to shoot at Hugo Lloris 12 minutes in, although Oyarzabal, who took on the false nine role, struggled early on against the physicality of the French defence.

Chances were few and far between for much of the first half, though, with Spain seeing an ambitious penalty shout for a Jules Kounde handball from Rodri’s cross rightly rejected during an in-game VAR check, before Marcos Alonso pinged a low free-kick harmlessly wide of Lloris’ goal eight minutes before the break. 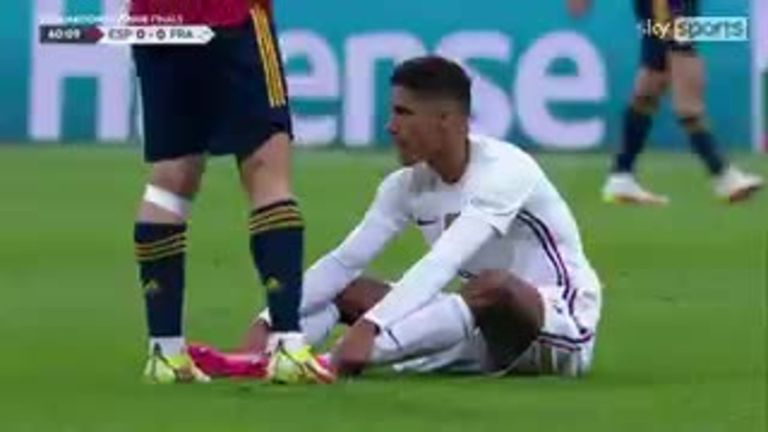 Worrying scenes for both France and Manchester United after Raphael Varane suffered an injury and had to be substituted in the Nations League final.

France – and Manchester United – were dealt a blow on 43 minutes when Varane was forced off with a thigh injury, with Upamecano taking his place. However, it was Kounde whose mistake allowed Spain their first flourish of the second half, although Sarabia’s cross for Torres was a poor one.

For the second time in the match, Spain’s penalty appeals were waved away on 56 minutes when Aurelien Tchouameni sent Gavi tumbling in the box after making a firm but fair tackle, but they hit the front in dramatic fashion soon after.

Benzema cannoned a shot off the underside of the bar from a France counter-attack and Spain raced up the other end, with Sergio Busquets feeding Oyarzabal to skip past Upamecano and shoot into the far corner. 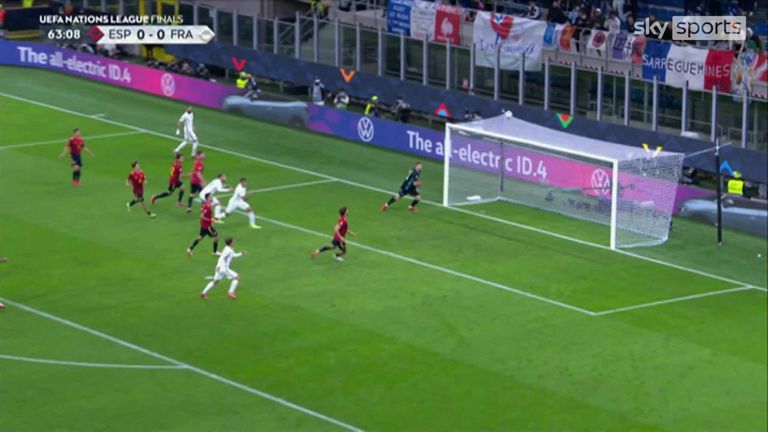 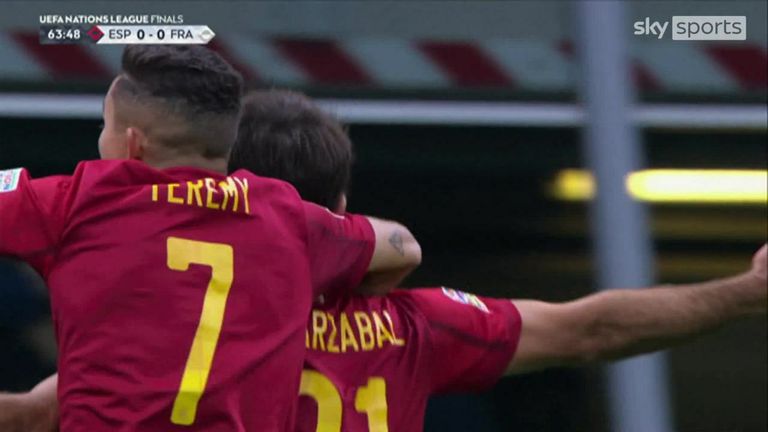 Spain’s supporters were still celebrating when France equalised, though; Benzema bent in a brilliant effort off the finger-tips of Simon from just inside the penalty area to haul his side level. 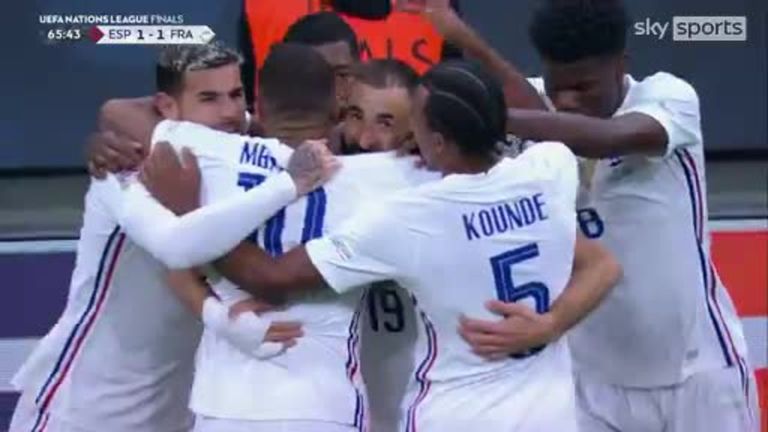 The drama wasn’t done, with Mbappe’s winner coming in controversial circumstances: the striker was only spared being called up by VAR for offside by a faint touch from Eric Garcia on Hernandez’s pass, which initiated a new phase of play. 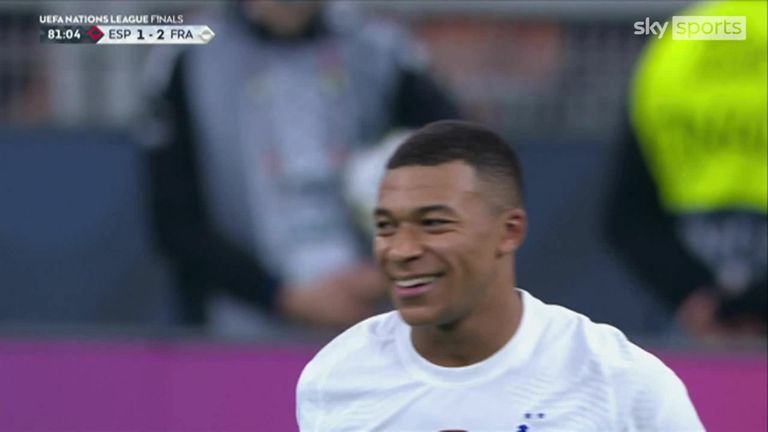 Kylian Mbappe survived a very tight VAR offside call to put France 2-1 ahead against Spain in the Nations League final.

It was cruel on the Spanish but the 22-year-old forward kept his cool and, after a couple of step overs, drilled in a low finish to put France on the brink.

For Mbappe, it was a sweet moment given his Euros error. For France – who held firm during a late Spanish onslaught – the trophy is a reminder of their strength after a summer of criticism.

‘France get lucky with winner’

“France looked a broken team in the Euros and felt they had to change everything, including the manager and the players. But this proves you don’t always have to do that. You can get success in other ways and they’ll be delighted. I felt in this game they would wait for a moment, and in the end they got two.

“Spain were the better team in terms of keeping the ball and technically but what France have got up front were killers. They had goalscorers in Benzema and Mbappe that unfortunately Spain didn’t have.

“When Spain had opportunities, they just didn’t have that extra pace to get away.

“I do feel the goal is a contentious one. I feel France are very lucky.

“There are two schools of thought with that, as I feel that Mbappe is definitely in an offside position. The only reason that Garcia plays the ball is he knows Mbappe is behind him. So France get really lucky.

“I know the interpretation now is different but offside in this situation should really be offside.”

The Latest News on Spain 1 – 2 France

16 best winter boots for every budget